Most of the eastern ranges, where a lot of bushwalking happens, are 2m resolution DEMs. The coast is typically 1m, and the western slopes and plains are 5m (with areas around major rivers 1m!). Be careful if you need to merge DEMs with different resolutions - see below for more details.

The data comes doubly zipped, so the individual zip files need to be extracted to a folder, and then unzipped themselves. The .ASC files can then be dragged and dropped into QGIS.

There are various ways to merge rasters in QGIS.

The simplest is probably to use the the Raster- > Miscellaneous → Merge… function. 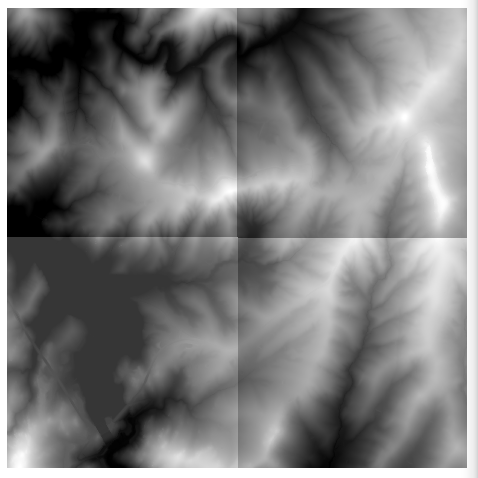 Internally, QGIS uses gdal_merge, which defaults to using the resolution of the first file. This is not always desired. It can be controlled by using the optional -ps (pixel size) switch. For example, if you have a combination of 1m and 2m DEMs, you can use -ps 1 1 to force them to a merged 1m DEM, or -ps 2 2 to force them to merge to a 2m DEM.

It is also possible to merge DEM data in QGIS using a Virtual Raster (Raster- > Miscellaneous → Build Virtual Raster… ). Note that the performance of these within QGIS seems poor. Any operation seems to result in screen redrawing, so moving around and zooming in and out is slow and painful.

However, if you are just using the Virtual Raster for future steps, then the limitations from the screen redrawing may not be important.

Internally, QGIS uses gdalbuildvrt. Uncheck “Place each input file into a separate band”, and if you are using files with different resolutions (eg 1m and 2m), change the Resolution to Highest or Lowest as appropriate.

See Managing large DEMs for more information on large Virtual Rasters, and how they can be used as an initial step to quickly get a merged DEM for an area of interest.